I recently read Dan English’s great post regarding On-Premise Power BI and the overall MSBI on-premise deployment option and roadmap. In short, Power BI on-premises won’t be available until the next release of SQL Server, whenever that is, despite significant and recent (MS Ignite) suggestion that it would be. Dan mentions the Pyramid BI Office communication as a related example and, in the same vein of mismanaging communication and expectations, this also falls into the pattern of Power Query integration (or lack thereof) that I’ve mentioned several times. 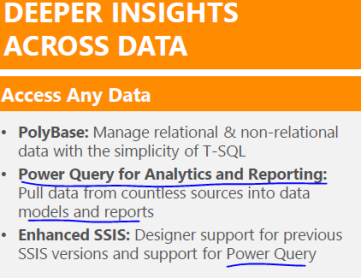 Dan has done 100X more in MSBI than I have but like him, overall I feel great about the SQL and Power BI teams, where the products are currently, and where they’re going. Riccardo Muti’s SSRS blog post mention of Excel Online support in the next release SSRS Native is particularly encouraging – I previously wrote in my SQL 16 Wish List blog “Why is Excel being left out of MSBI symmetry plans?” (Fair question, right?)

What struck me most about Dan’s post, however, was the effort he put into explaining that he is and remains a ‘huge Microsoft fan’. (Also like Dan, I still own a Windows Phone too (but use an iPhone)).

It reminded of the following two tweets I saw from Thomas LaRock:

I’m not an MVP and thus have no idea what exactly was communicated at the recent MVP Summit but I’m beginning to form the conclusion that part of the price Microsoft is charging for their MVP award is a very high level of loyalty and support, even when issues and delays like on-premise Power BI and Power Query integration happen.

I hope I’m wrong (Dan, Thomas or other MVPs are welcome to correct me) – I’d like to think (and have thought) that Microsoft MVP represents expertise in your domain and contributions to the field and community. The painful question arises: “Does MS allow MVPs to maintain an objective perspective (ie features, cost, timelines, etc) on MSBI products  and occasionally express legitimate doubts and concerns?”

Especially for the features that cut across product teams I’m sure the complexity is tremendous and I DO have empathy for that. (One of the top challenges in BI is that it cuts across business and IT teams) However, if MS has taken this approach with MVPs, it would be much more disappointing than the product delays themselves. To my mind it would be like a government telling (or implying to) several top news media companies that you either publish positive stories or you’ll be ignored and/or blacklisted in some way – you’d lose respect for that government and confidence in your news pretty quickly.

Furthermore, I think it’s criticism of ourselves and everything around us that helps to move things forward – it’s a genuine desire for something better, not an intent to shame or hurt anyone. Certainly you can go to far but Microsoft, whether its James Phillips or Kamal Hathi or whoever it is, someone has to be held accountable when words and marketing on top and important features do not align with realities and relationships with customers are impacted.